I am in Rishikesh, India, a place of pilgrimage for those who wish to bathe in the Ganges–something millions of Hindus aim to do at some point in their life, in order to fulfill a purification ritual that cleanses the soul from the effects of past karma.  Visiting the Ganges has been an aspiration of mine ever since I read the life-story of Thomas Merton when I was 18 years old.  Coming here has been a feeling of ‘coming home to myself.”

Before I left for India, I contacted Saraswathi Devi, who runs Prana Yoga Ashram in Berkeley, California.  We both studied with Swami Vignanananda, who was told by his teacher, Swami Sivananda to “Take Yoga to the West!” . . . and so he did! . . . Establishing ashrams in Japan, Europe, Berkeley, Grass Valley, and other locations in North America from the 1950’s until his death in 2008.

Saraswathi told me that of Swami-ji’s contemporaries, Swami Hamsananda, is still alive and lives here in Rishikesh at the Sivananda Divine Life Ashram, where he teaches Sanskrit.  My partner, Harold, and I stopped in to pass on regards from Saraswathi, and now Swami Hamsananda has taken us under his wing. 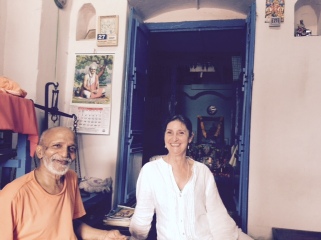 In addition to making arrangements for me to study pranayama with Swami Swarupananda (more on that next week), Swami Hamsananda has invited me to participate in a fire ceremony at the Ganges.

What a gift to join in ritual and receive the blessings of this very sacred land with everyone chanting prayers.